The Buriganga River is a tide‐influenced river forming the western and southern boundaries of Dhaka City, the economic and political capital of Bangladesh. Originating from the Dhaleshwari River through the Karanatali tributary, the Buriganga’s average width and depth are 400m and 10m respectively. Over the past several years, the river’s length has diminished from 27km to 18km due to siltation and encroachment: 11km of the remaining river flow through Dhaka District and 7km are in Narayanganj District with a very small portion at the river’s terminus in Munshiganj. The present head of the Buriganga near Chhaglakandi has silted up and opens only during floods, but the lower part is still open throughout the year. The downstream junction with the Dhaleshwari fluctuates from time to time according to changes in the position of the latter river. Its course by Dhaka is stable, fixed by the resistant clays. 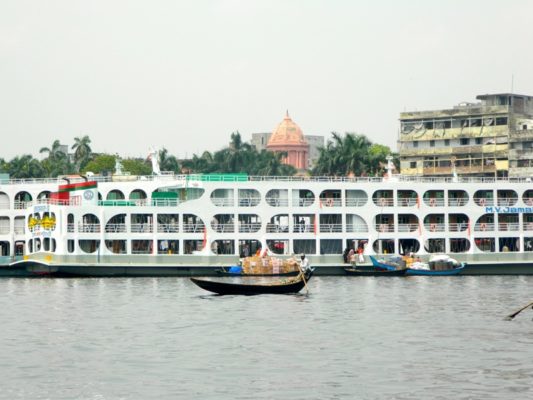 The Buriganga means old Ganges (‘buri’ means old and ‘Ganga’ means the Ganges). The name came from the fact that it was once the last stretch of the Ganges before it merges with the Bay of Bengal. The link was severed when the river changed its course. It is now fed by the flow from another river called Turag.

The early 17th century saw the establishment of Dhaka, the capital city of Bangladesh, on the north-bank of the Buriganga River. Dhaka is surrounded by a peripheral river system comprised of the Buriganga, Balu, Turag, TongiKhal and Shitalakshya Rivers. A number of water channels, known locally as khals, crossed through and around the city in the past and were of hydrological importance, linking the budding capital with the hinterlands of Bangladesh, and bringing economic activity to the heart of the city on the Buriganga. Since the establishment of Dhaka, the Buriganga has supported the city’s development as the primary water supply, drainage outlet, and flood control for the city’s inhabitants. Since the country’s independence in 1971, Dhaka has expanded towards the north due to heavy population pressure on the periphery of the river.

Despite the critical role of the Buriganga River in supporting and sustaining the development of Dhaka, it is the most polluted river in the country. This river is struggling for its existence, and it is under threat of becoming a “Dead River.” To protect the Buriganga River through enforcement, monitoring and community action Buriganga Riverkeeper has been working since 2009. The aims of this journey is to work for swimmable, drinkable and fishable Buriganga. It works to achieve this goal through social movement, advocacy and legal measures that ensure water quality protections. The litigation, advocacy and community teams of Buriganga Riverkeeper conduct interconnected activities that serve this mission.