Human Chain to Save Buriganga River from Shyampur’s Dyeing Pollution 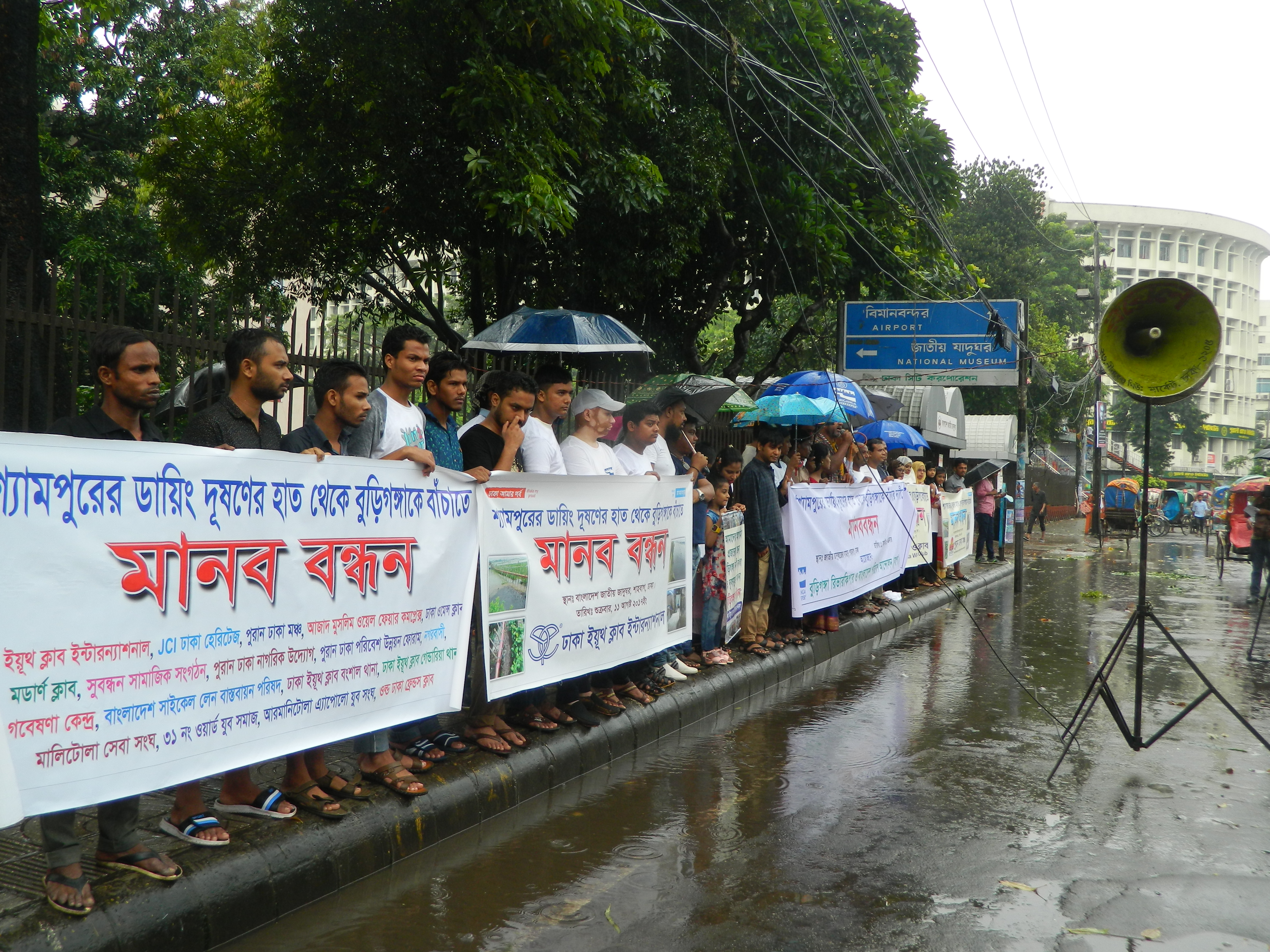 After Hazaribagh Tannery, the second largest deadly clustered pollution directly to the Buriganga has been generating from Shyampur dyeing industries. To stop this pollution, Bangladesh Poribesh Andolon (BAPA) and Buriganga Riverkeeper jointly organized a human chain demanding, ‘Save Buriganga from Shyampur’s Dyeing Pollution’ on 11th  of August,  2017, at 10:30 AM in front of Bangladesh National Museum, Shahbagh, Dhaka. Despite the heavy rainfall in the morning, many organizations and activists, women and children, especially from Old Dhaka, protested along with BAPA and Buriganga Riverkeeper. 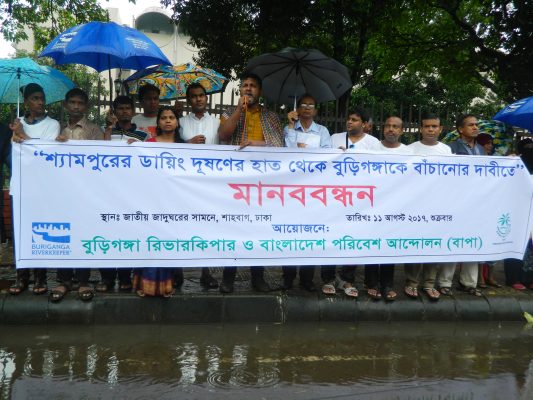 The Buriganga River is now becoming one of the worst victims of pollution caused by the Shyampur’s dyeing factories, located at Kadamtali Thana, Dhaka District. The boundary of these factories starts from the Buriganga Bridge (Postogola Bridge) to Kadamtali, Shyampur, Dholeshwar and Dhaka match factory and ends at Munshikhola. Around 42 dyeing industries located in the Shyampur area have been seriously polluting the Buriganga River. There are approximately 70-80 rolling mills, glass factories including the small and big ones which have been operating in Shyampur since the 90’s. High level of concentrated dyes, chemicals, and heavy metals are being directly dumped into the Buriganga River through the hidden pipelines connected to these factories. Ironically, none of these factories follow the proper Effluent Treatment Plant (ETP) before discharging the industrial wastes into the Buriganga. Hence, the river water has turned into dark black color. There are around 62 types of hazardous as well as toxic waste chemicals including Acetic Acid, Oxalic Acid, Cyanide, Caustic Soda, Mercury, Lead, Salts and low-quality dyeing agents. Locals and some factory workers have informed that some of the harmful coloring compounds were being emitted from a total of 64 pipelines, which were attached to those factories before going directly into the Buriganga. However, no waste water refinery systems have been installed in these factories. People living near the rivers have no other alternative, thus, are forced to use polluted river water. This polluted water causes water-borne and skin diseases.

Environmental Activist Sharif Jamil, Joint Secretary of Bangladesh Poribesh Andolon (BAPA) and Buriganga Riverkeeper, has told that 60 percent pollution of rivers around capital Dhaka occurs due to industrial waste – 30 percent from government institutes (WASA and City Corporation) and 10 percent from the household. The Buriganga has been polluted due to textile and dyeing wastes. The rivers surrounding Dhaka city are going to disappear due to illegal encroachment and continuous dumping of wastes. Buriganga River is important for this city since the communication between South Bengal is connected to Dhaka through the Buriganga, he said. Most of the natural drainage in the capital has disappeared due to encroachment.

Environment and biodiversity of the riverbed are badly degrading due to the pollution but nobody is taking proper and effective steps for the survival of the rivers.

In his speech, General Secretary of BAPA, Dr. Mohd. Abdul Matin said, ‘We have been campaigning for the last 20 years to protect the Buriganga. We have seen that most of the common people including the people of Buriganga are in favor of protecting the Buriganga. Even Government Ministers and Officials often mentioned in their speeches about the Buriganga protection. In fact, they do not have any initiative to take responsibility of the river as well as to reduce the pollution. He also said, ‘After the tannery industry was relocated from Hazaribagh in the context of our long movement and demand, Buriganga is becoming the leading cause of pollution for Shyampur’s dyeing factories. In the past, we have noticed that the Buriganga is being repeatedly polluted by industrialists. Therefore, we demand that Shyampur dyeing factories should be closed immediately to save the Buriganga at any cost. He alleged that urgent and immediate intervention of Honourable Prime Minister is needed to save the Buriganga. In order to protect Buriganga on an emergency basis, laws should be enforced, he said. 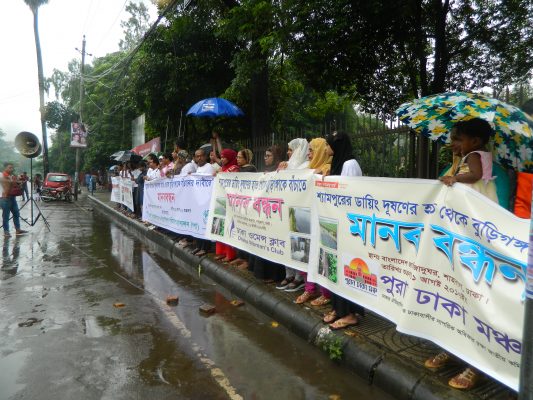 For the greater interest of this country, it is important to shut down these Shyampur Dyeing factories immediately and implement a proper effluent treatment plant (ETP). Following recommendations were demanded throughout the human chain:

The news of this event was published in the following national dailies: