Press Conference: Disappearing Source-face of Buriganga due to Reckless Encroachment and Filling 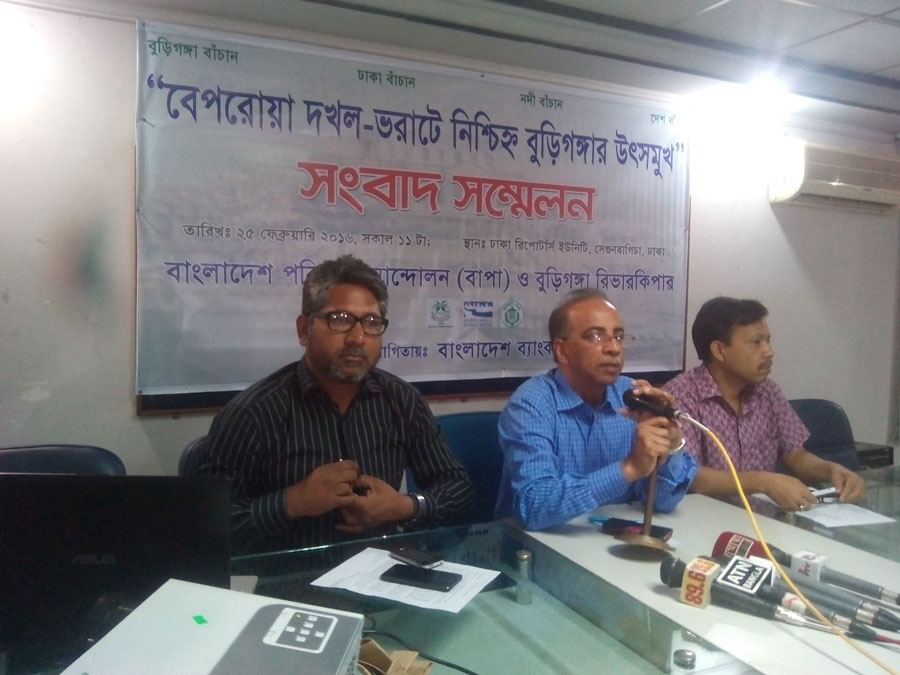 A press conference on ‘’Disappearing source-face of Buriganga due to Reckless Encroachment and Filling’’ was held on February 25, 2016 organized jointly by Buriganga Riverkeeper and Bangladesh Poribesh Andolon (BAPA) at Dhaka Reporters’ Unity auditorium at 11:00 am. Sharif Jamil, Buriganga Riverkeeper and Joint Secretary, BAPA was the keynote speaker on the occasion. The General Secretary, BAPA, Dr. Md. Abdul Matin and Mr. Mihir Biswas, the Coordinator of Buriganga Bachao Andolon also spoke in the press conference.

Reckless encroachment and filling of second channel and source face of Buriganga River from Dhaleswari river at Dhalikandito Bosila exposed by the multimedia presentation of the keynote speech. After an extensive fieldwork, the situation was found more severe in some areas, like-Chunarchar, Varaliapara, Mugrakanda, Uttar Baherchar, Totaliapara and Char Washpur.

Sharif Jamil revealed that at most of the points the original river was identifiable.  According to the local people, during monsoon this river used to get flow. But the aggression of CLC Power Company LTD and some real estate companies in Washpur area were blocking the channel coming from Dhaleswari. He mentioned that a committee chaired by the Chairman of Bangladesh Inland Water Transport Authority (BIWTA) was formed to restore the second channel, though the committee failed to initiate any effective step.

Mr. Jamil and his team visited the source face of Buriganga River and documented the encroachment and filling. The Riverkeeper found that, almost everywhere in Shamlasi, Totaliapara, Vakurta and Charwaspur, real estate companies and brickfields are grabbing river.

In some places in Auwal market and Solai market area, illegal establishments like, mosque, school, market have blocked the river.  He found that these illegal establishments have blocked the source face of River Buriganga and ultimately reduced the flow of water in the  second channel of Buriganga in city area. It encouraged the reckless encroachment to this channel that was first documented and exposed publicly by Buriganga Riverkeeper in 2012.

Dr. Md. Abdul Matin said, River Buriganga is the lifeline of Dhaka city and it is now in great danger. He added that for last 15 years environmental activists have been working to protect this river, but unfortunately we could not see any satisfactory result. He also expressed his support to the Government and mentioned that the civil society was always with their initiatives to save Buriganga. Mr. Mihir Biswas thanked the Prime Minister of Bangladesh for her continuous support for protecting environment and said, it was our pride that she awarded with the prestigious recognition of ‘’Champion of the Earth’’ for her contribution to the protection of Bangladesh Environment. He also added that we would always support the initiatives for the environment and people. In the interactive session Mr. Jamil answered the questions from the journalists.

The press conference was covered by a number of national daily newspapers and TV channels. To view details please follow the links below: