Roundtable meeting on “Pollution to the Buriganga River and Tannery Relocation: Our Responsibility” 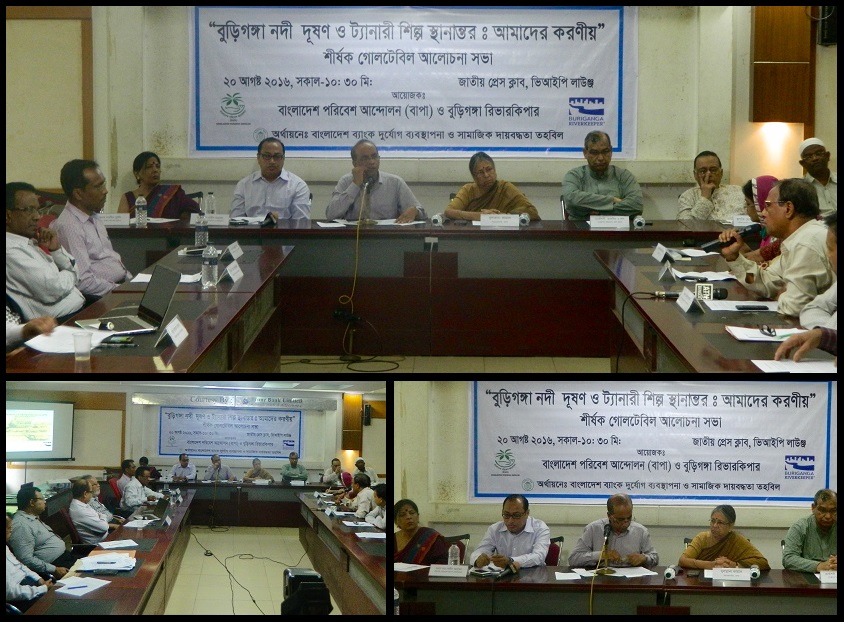 A roundtable meeting on “Pollution to the Buriganga River and Tannery Relocation: Our Responsibility” was held on 20 August 2016, organised jointly by Buriganga Riverkeeper  and Bangladesh Poribesh Andolon (BAPA) at VIP lounge of National Press Club. The meeting was presided over by Sultana Kamal, vice-president of BAPA where Sharif Jamil, Buriganga Riverkeeper and Joint Secretary, BAPA delivered the introductory speech.

Advocate Sultana Kamal said, ‘we want a sustainable development that will ensure no harm to the nature and livelihoods of people. Development should be user-friendly, environment-friendly and sound. Along with Buriganga, the rivers around Dhaka city are in great danger due to encroachment and pollution. We should be united and conscious to protect the rivers.’

Syed Abul Maksud said, ‘Due to the negligence of the Government and the owners, relocation of Tanneries are being delayed. Tannery Industry is contributing to our national economy but at the same time, Buriganga River is being polluted due to the dumping of Tanneries. We want an effective action which will save both the River and the Tannery Industry.’

Taqsem A. Khan said, ‘Dhaka WASA is the worst victim of the pollution to the river Buriganga. Now it is impossible to clean the water from Buriganga River during winter to supply safe water to the city dwellers. For this reason, we had to use water of Shitalakkha and now we have to bring water from Padma and Jamuna.’ He also said, ‘we are working on environment-friendly and sustainable water management. By 2017 we will ensure pure water for all. WASA is trying to minimise pollution using 5 sewerage treatment plants.’

Focusing on the overall improvement of the project of Hazaribag Tannery industry relocation, Md. Abdul Kaium said, ‘we are trying to build environment-friendly production by transferring the tannery industries of Hazaribal along with others in Savar by building modern Tannery area with CETP. According to the declaration of the Government, 2 module of CETP construction has already finished.’ He also said, ‘Government is trying to build the relocated tannery industrial park as a modern industrial area.’ For that, he requested all the industry owners to be sincere about it and transfer their industry from Hazaribag to Savar as soon as possible.’

Mr Abdul Malek said, ‘the worker’s affair i.e. their residence, education, medical treatment etc. were not considered in the relocated area of Savar.’ He requested to the authorities to think about these things seriously to make this relocation process feasible.

Md. Shakawat Ullah said, ‘In spite of various claims of Government, the newly developed area in Savar is yet ready to accommodate relocation of the industries practically.’

Mubasshar Hussain requested to the Government to take necessary steps against the illegal occupants and river polluters. He suggested, if necessary, the government should declare special tribunal to bring them under legal action.

Syeda Rizwana Hassan said, ‘ in the court, repeatedly the ministry stands on behalf of the Tannery industries to seek time for the relocation. It is a nexus of the government officials and tannery businessmen to take advantages by exploiting people, river and relocation issue.’

Umme Salma said, ‘Children of the entire downstream area after Hazaribag are also in great health risk. We cannot walk beside Buriganga with our children.’ She requested to the Government to protect Buriganga River as their want to live and livelihoods are directly related to the river Buriganga.

Sharif Jamil said, ‘ the relocation of Hazaribag Tannery should go under a comprehensive plan of action. This process should not further increase the pollution by shifting that to the upper riparian area of Buriganga in Savar. We should ensure that the relocation process is scientific and not unplanned.’ He asked for quick implementation of the