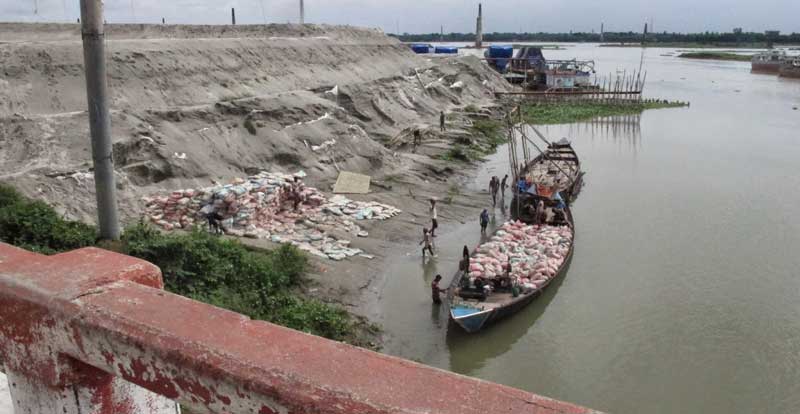 Encroachment is the biggest struggle for the river Buriganga in terms of its structure and existence. The original flow of the river is completely blocked and the old channel from Dhaleswari River to Lalbag Lohar Pool has been fully grabbed. As Dhaka, the capital city of Bangladesh has been growing recklessly by the bank of Buriganga, increasing population pressure and poor governance are encouraging the encroachment of river land as an open secret. The current flow of Buriganga River is the flow coming from Turag River that is also under tremendous threat. After grabbing of riverbank and foreshore of the river, now encroachment is going on over the riverbed area in many places on the Buriganga.

The government constructed short length and low height bridges including several structures and establishments on the river that encouraged powerful political and social actors to grab the river land with open supports and assistance from the corrupt part of the government officials. Big commercial entities are mostly responsible for the ongoing encroachment. Very insignificant poor and the migrant population is also there at some extends occupying the river land. Faulty demarcation of the river has also encouraged the encroachment significantly in recent days.

Majority of the industries of Bangladesh are located by the riverbank. There are approximately 2,500 factories located on the river area surrounding Dhaka reported by different government agencies. At least 400 industrial plants including around 240 tanneries are discharging untreated wastewater directly into the Buriganga.

A study conducted by Institute of Water Modeling (IWM) shows that 60% pollution to the rivers around Dhaka is coming from the industries where 30% of government institutions and rest 10% from the households.

In addition to untreated Tannery Wastes, there are huge upstream textile pollution, pollutants from Dying factories in Shyampur, the discharges of Dhaka WASA and DCC along with vessels on the river.

The untreated harmful byproducts in high‐volume effluent such as several classes of solids, nitrogen compounds, neutral salts, chromium compounds, solvents, oil and grease from the tanneries and other industries cause severe damages on river ecosystem and human health.

Increasing population pressure causes many illegal settlements along riverbanks across Dhaka City. Land occupiers have profited from constructing houses and factories illegally along the Buriganga this encouraging similar malfeasance by others profit seekers and these occupiers dump garbage intentionally along the riverbanks which are a result of the negligence of the Bangladeshi government to enforce existing laws. Haphazard and unregulated growth along the Buriganga riverbank not only contributes significantly to river pollution but also reduces the river’s navigability from siltation. Complacency and corruption have also made it hard to protect the public interest in river‐related issues.

The impact of Farakka Barrage and other transboundary interventions reduced and changed the watercourses and flows inside Bangladesh at the upstream of the Buriganga. Also the rivers like Jamuna, Dhaleshwari, Kaliganga, Bongshi, Turag etc. are not dredged and maintained properly that directly impacted the flow of the river Buriganga. This expedited encroachment and toxicity to the river Buriganga.